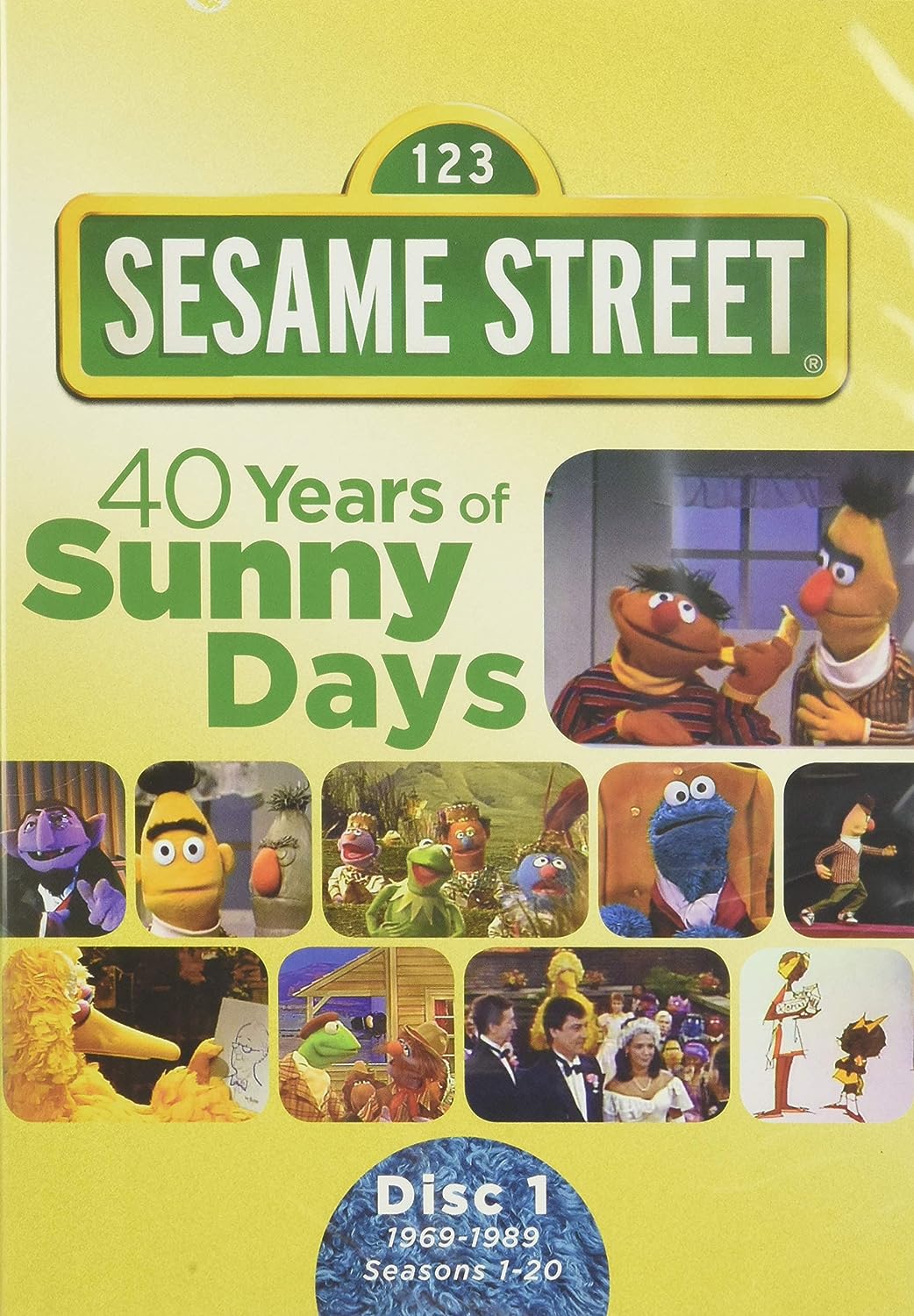 Relive your favorite Sesame Street moments with this one of a kind Sesame Street Collection! Everyone remembers the familiar words to the Sesame Street theme song, and the even more familiar tune, but how much do you really know about the world's most famous street? When did Elmo first begin speaking in that world-famous falsetto? Can you name the musician that sang Slimey into space? Which Muppet was most distraught by Mr. Hooper's passing? Who is the voice behind Abby Cadabby? Can you guess which clip was voted the fan favorite in an online poll? Find the answers and much, much more packed into this special anniversary DVD set, which includes clips from all 40 seasons, interviews with cast and crew, including Jim Henson, as well as amazing behind-the-scenes peeks at how Muppet magic is created.

Sesame Street has been educating and entertaining kids for 40 years. But the kind of TV programming for children that we currently take for granted didn't exist until Joan Ganz Cooney and Lloyd Morrisett dreamed up the concept of curriculum-based, educational children's television in the late 1960s. By 1969, lots of research, consultation with educators, and testing had culminated in Sesame Street--a show that was groundbreaking not only for its educational content, but also for its integrated cast and realistic setting. Amazingly, the show hasn't really changed all that much in 40 years--it still maintains its focus on educating kids and helping them understand and deal with things they're likely to encounter in their real lives. It accomplishes those goals with great characters, skilled puppetry, and the latest technological advances in animation. Summing up 40 years of Sesame Street programming in about five hours is no easy task, but this two-disc set is a great compilation of "best-of" memories, arranged by season. Classic scenes with Ernie singing "Rubber Ducky" and Kermit crooning the moving ballad "It's Not Easy Being Green" are obvious favorite choices, as are recurring segments such as the "Pinball Machine Count" (sung by the Pointer Sisters), "Ladybug Picnic," "Monsterpiece Theatre," and Cookie Monster attacking pile after pile of cookies. Scores of famous singers, actors, and sports stars have guest starred on "i"Sesame Street over the years. This compilation includes performances by Lena Horne, Henry Winkler, Mr. (Fred) Rogers, James Taylor, Smokey Robinson, Pee-wee Herman, Marilyn Horne, Tony Bennett, Robert De Niro, Olamide Faison, Alicia Keys, Matt Lauer, David Beckham, and Neil Patrick Harris. In addition to an assortment of typical "i"Sesame Street segments featuring everyone's favorite characters, both Muppet and human, there are also several hugely memorable episodes, including when Big Bird learns that Mr. Hooper has died and isn't ever coming back, Luis and Maria's wedding and the birth of their first child, Snuffy's first appearance before someone besides Big Bird, and the time a hurricane blew away Big Bird's nest. Other favorite segments like "Elmo's World," "Bert and Ernie's Great Adventures," various alphabet and counting songs, and a star-filled rendition of "Sing, Sing a Song" are also included in the compilation. Among the bonus features are optional pop-up facts and "Behind the Street" scenes; interview footage with actors/puppeteers, producers, and puppet designers/builders; TV montages; a fan-favorite scene; and a preview of "Abby's Flying Fairy School," a segment that features Sesame Street's first-ever CGI animation. Whether reliving childhood days watching the show or sharing it with a whole new generation, everyone will be thoroughly entertained by this great collection of "i"Sesame Street programming. "i"--Tami Horiuchi

Covid-19 Vaccination is available from 10am today in Masterton, Carterton and Featherston across 5 different clinics. Get yours today and make the Wairarapa numbers count - let's show Aotearoa what we've got!
BBQs, treats and eats - so if there is a wee wait, we've got you sorted. Need a ride there? Email CVC@wairarapa.dhb.org.nz.
Please tell our guys what a great job they are doing - they are superstars, working hard for us all.
Let's nail this vaxathon, Wairarapa!! ... See MoreSee Less

Have you signed up to be a SMART Library member?

It's easy to do, pop in and see us and we will get you joined up and ready to enjoy being a SMART member. ... See MoreSee Less

Did I miss something? What is this Smart library!?

Our District Councillors meet on Wednesday [October 20] at 1pm.

There's an update on the Five Towns Trail, and a recommendation for a decision on the proposed animal facility.

The meeting will be livestreamed. We are, of course, operating under Alert Level 2 restrictions. ... See MoreSee Less

Hey folks, we will be at Gladstone Friday and Carrington Park Saturday handing out vouchers to people getting their first vaccination.
Both days we will be giving away up to 100 vouchers, valued at $10 or $20 each.
These can be redeemed in either Almo's Books or Page 42 Cafe. We're also taking some coffee vouchers for the vaccinators and volunteers.

We're doing this to thank people for making the effort to get jabbed and protect our community, and Wairarapa businesses - we see it as vital that we get the vaccination rates high enough to prevent further business disruption, for everybody's benefit.

A huge thank you to everyone who has already rolled up a sleeve! Lets get the 'rapa to the highest vaccination rates in the country! ... See MoreSee Less

How useful was this information?

No votes so far! Be the first to rate this post.

We are sorry that this post was not useful for you!